As archaeological excavations of Park Street burial ground for HS2 come to a close, MOLA Headland Community Engagement Officer, Andy Sherman, explores the hidden historical treasures of the immediate area in this blog. If you’d like to explore the often-forgotten gems of Digbeth for yourself, then download our self-guided walking tour of Digbeth.

As Birmingham grew from a small Anglo-Saxon village into a bustling industrial Victorian city, so did the small district of Digbeth in modern-day central Birmingham. The area once dominated by water mills and small houses strung along the road toward the River Rea transformed into a bustling district, interlaced with canals and railways. From the medieval period onwards Digbeth and High Street Deritend formed the main road running east out of Birmingham. The road ran down to a ford in the River Rea, through Deritend and on to Coventry.  At this time Deritend was a separate village, located in the neighbouring parish of Aston, with its own chapel.

Few buildings remain from medieval Birmingham, although when you follow our self-guided walk along the western end of Digbeth, you’ll pass traces of several burgage plots. These are identifiable in the narrow shop fronts, which still conform to the boundaries of long, thin plots of land stretching away from the road owned by the medieval townsfolk of Birmingham. The Old Crown Inn is the earliest surviving building in modern Birmingham, located a short distance to the east of our walk on the corner of Heath Mill Lane and High Street Deritend. The inn is a beautifully restored half-timber building, originally built as the Guildhall and School of the Guild of St John the Baptist of Deritend in the late 15th Century. 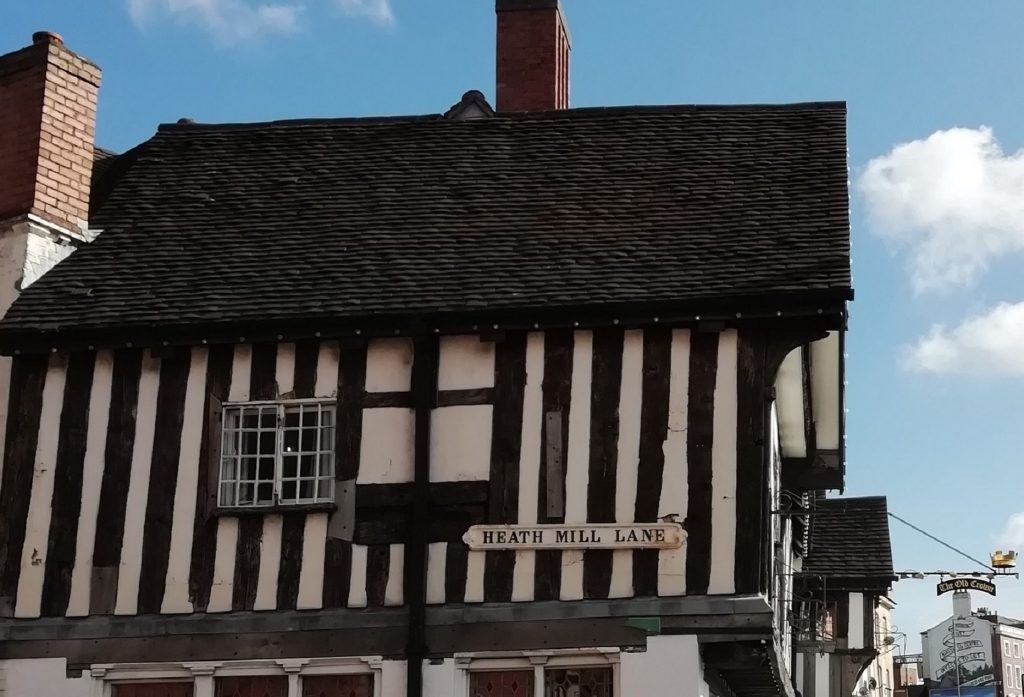 The Old Crown Inn, the oldest building in central Birmingham

Previous archaeological excavation has shown that from at least the 12th century the land to the north of High Street Deritend was dotted with industrial sites. Lots of different goods were being made here, including leather and pottery.  At this time, the River Rea wasn’t contained by concrete; it meandered north, lined with water meadows and mills for grinding flour.

In 1796, the Warwick and Birmingham Canal was built a few hundred meters to the north of High Street Deritend. 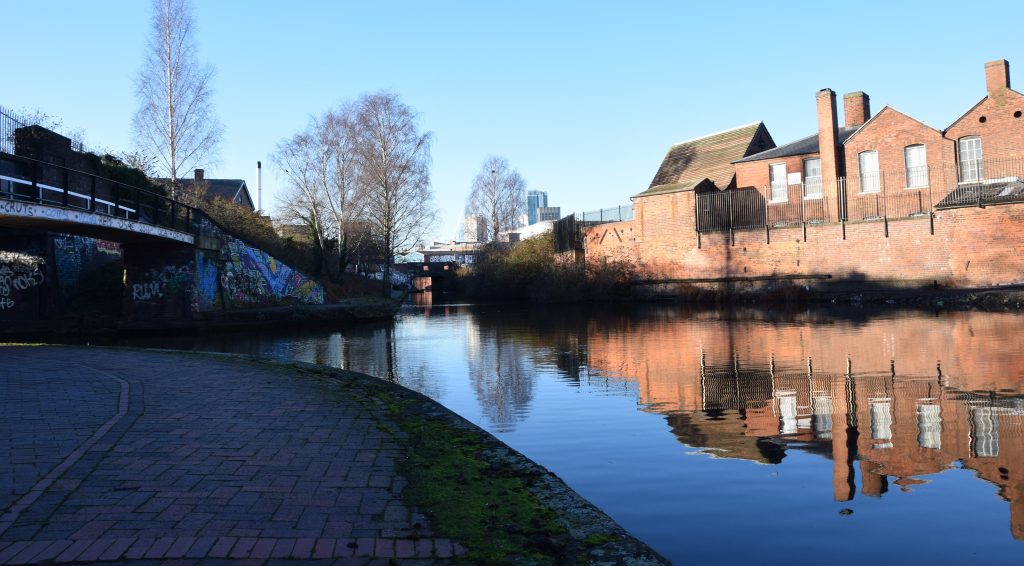 The digging of the canal network was a significant event that massively changed the character of Birmingham, turning it from a small market town into an industrial powerhouse.  Within a year of Birmingham’s first canal opening, the price of coal dropped from 14 shillings a tonne to 4 shillings a tonne.  The Typhoo Tea depot (highlighted on the guided walk) received 3000 chests of tea a week from Sri Lanka, passing through London on its way to Birmingham along the canal network. The shipping firm of Fellows, Morton and Clayton Ltd, whose warehouse is still standing just off Barn Street, ran a ‘flyboat service’ down to London. This express journey stopped at few places along the route but still took 70 hours.

Almost 40 years later, in 1833, the London and Birmingham Railway was built, once again transforming the landscape, running from Euston Station in London to Curzon Street Station in Birmingham. The station at Curzon Street was one of the earliest mainline stations in Britain, had the first station refreshment room in the country and housed the oldest surviving station hotel in the world. The land around High Street Deritend was rapidly reshaped into a grid of streets, with a few surviving older and more sinuous streets preserved within the straight lines. Spread around this grid were factories making umbrellas and custard powder, public urinals (known by the prim Victorians as ‘temples of relief’) for people overindulging in the many pubs the area boasted amongst the rows of small workers cottages, workshops and warehouses.

Why not explore the historical delights of Digbeth for yourself and download our self-guided walk of Digbeth, or pick one up from Birmingham’s many cultural attractions?

The archaeological programme at Park Street in Birmingham is being carried out by our experts on behalf of LM for HS2 Ltd. To find out more about the programme visit https://www.hs2.org.uk/ or for information on what is going in your local area and how you can get involved, head to https://hs2inbirmingham.co.uk/.