The study of coins, and currency more generally speaking, is known as numismatics. In archaeology, numismatics can help us to ascertain precise dates and find out who occupied or passed through a particular site. They can also tell us about trade networks, belief systems and leadership.

In this blog, find out from our in-house numismatist, Julian Bowsher, all about a beautiful Iron Age gold coin discovered on the A14 Cambridge to Huntingdon improvement scheme. The particular site revealed a complex settlement occupied from the middle Iron Age to the end of the Roman period.

What tells us that this coin dates to the Iron Age?

Coins vary wildly in their size, shape and style, but this particular coin is known today as the ‘Gallic War Uniface’. It was made in about 57 – 55 BC by the Ambiani tribe who lived around what is now Amiens in the Somme area of modern day France.

As Julius Caesar invaded their territory in 57 BC, the Ambiani minted thousands of these gold coins to fund a resistance to the invader. Caesar crossed over to Britain the next year. The British tribes would have imported many of these coins from their ‘French cousins’ for the same purpose. 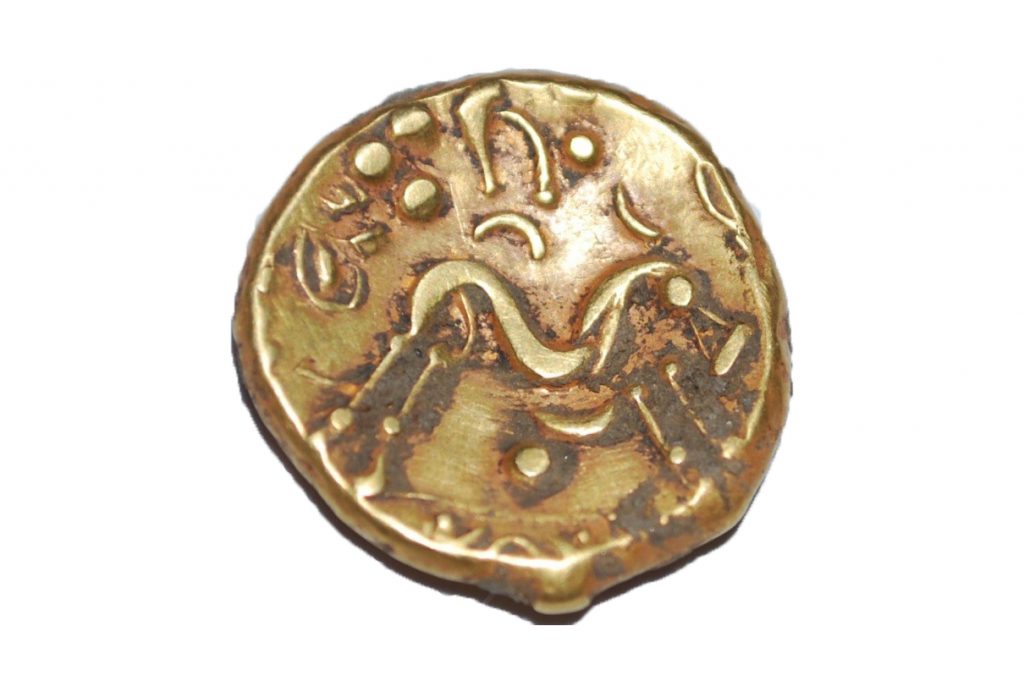 What does the design on the surface tell us?

It’s a lovely example and it’s in great condition having been preserved in the ground for over two thousand years. It’s a typical Celtic design – a stylised horse, made up of smooth curved lines – with the head to the right. The reverse is blank – hence ‘uniface’.

Have others been found?

These are very common in France and in south-east Britain. There were a number of silver and bronze Iron Age coins found along the A14 Cambridge to Huntingdon excavations but this one is the only gold coin found during the excavations.

Is it likely that a coin like this would have been used after the Romans invaded in AD43?

No, after so long these coins would have lost their currency value, though they would have been valued as bullion. This coin was uncovered in an Iron Age or Roman field boundary ditch and it was probably lost, only to be found by a modern archaeologist (rather than a Roman soldier!) more than two thousand years later..