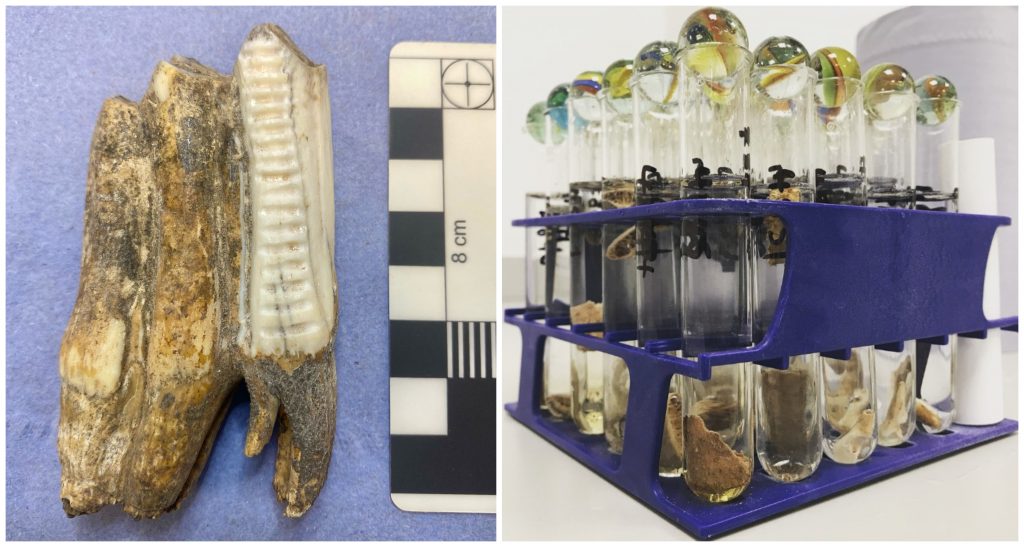 Isotope analysis makes it possible to understand past environments and the human diet by using information taken from a single tooth, bone or plant grain. This revolutionary technique is being used by Professor Janet Montgomery and Dr Joanna Moore (of Durham University) on materials found during the A14 Cambridge to Huntingdon National Highways scheme. This work is transforming our understanding of Cambridgeshire’s past.

What is isotope analysis?

All elements such as oxygen, carbon and nitrogen, are made up of atoms. These atoms have a nucleus containing protons and neutrons surrounded by a cloud of electrons. The number of protons within an atom of a particular element never changes – if it did, it would become a different element. However, the number of neutrons can, and these variants are called isotopes. Isotopes are everywhere in the natural world, and individual foods and environments have different and unique ratios of these. As living things grow, they absorb these unique isotopes, which leaves a record of the foods they ate and the environment they lived in.

Isotope analysis works by separating atoms into their various isotopes by looking at differences in their weight – caused by the varying numbers of neutrons. This is done using a piece of kit known as an ‘isotope ratio mass spectrometer’. Archaeologists are able to extract this information from ancient teeth, bones and plant grains, and then compare these results to known examples from various substances and landscapes. Doing so enables us to reconstruct the environment a person, animal or plant experienced whilst they were alive. 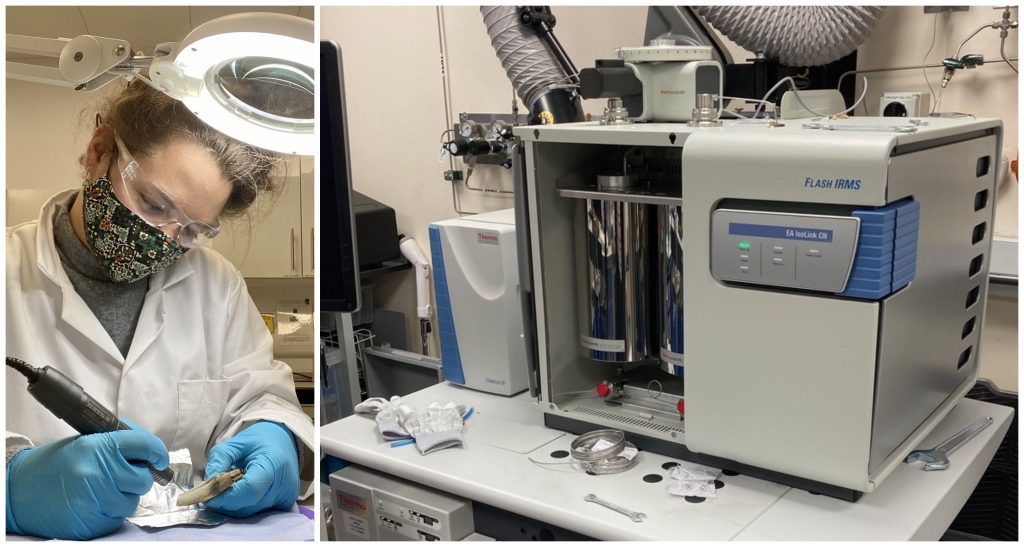 (1) A specialist drills holes in a cow tooth to extract oxygen samples for analysis. (2) An isotope ratio mass spectrometer.

What can isotope analysis tell us?

Isotope analysis firstly enables us to work out the types and quantities of foods that past peoples were eating. This not only tells us how they were using the environment they lived in, but whether there were any potential cultural influences or taboos when it came to their diet – for example, avoiding eating fish and seafood. Periods of famine can also be identified using isotope analysis, providing evidence for potential social, economic or environmental stresses.

Another way Isotope analysis is used is to provide information on how past populations travelled. By comparing the isotopic compositions of individuals to the local environment, we can tell when a person was not originally from that area. However, working out exactly where that person might have come from is more difficult and often multiple places are contenders for their place of origin.

When it comes to animals, isotope analysis can inform us about how livestock were reared and used by past peoples. For example, we can determine what animals were eating and whether their diet changed prior to being slaughtered. Equally, isotope analysis enables us to see when, and how frequently, domestic animals were giving birth, shedding light on whether they were being used for diary or meat production.

(1) A cow tooth analysed to try and determine birthing seasons. (2) Bone samples demineralising in acid during the collagen extraction process.

What are we learning about past life around the A14?

This is the first commercial project to use isotope analysis on such a large scale and across such a wide timespan. Samples from human remains, domesticated animals and plant grains have all been taken, dating from the Bronze Age (2000 BCE) through to the Anglo-Saxon period (410-1066 CE). This offers an exciting and rare opportunity to look at changes that took place over 1000s of years in diet, travel, animal husbandry, and living conditions in and around Cambridgeshire.

Currently the team in Durham have analysed the samples taken from human remains. This has revealed that remarkably people’s diet in this region remained unchanged for 1000’s of years. They mostly appear to have eaten native crops (e.g., wheat, barley, rye and root vegetables), as well as some animal products such as milk, cheese, and meat.

The results also show that the majority of the people appear to have grown up in the local area. However, one Roman skeleton stands out from the rest as being a clear migrant to Britain. We know this because the isotopes indicate that for the first five years of their life, they had a diet made up almost entirely of plants such as millet, sorghum, and sugar cane, which are not native to Britain. Yet, after the age of nine they began eating foods more commonly found in western Europe, suggesting that they may have moved from the eastern regions of the Roman Empire in their early-mid childhood.

The next phase of the project will focus on analysing the carbon, nitrogen, sulphur and oxygen isotopes from a wide range of plant grains and domestic animals (cows, sheep/goats and pigs). This will offer a unique opportunity to find out more about how livestock were reared and the other ways in which people inhabited the Cambridgeshire landscape over 1000s of years.