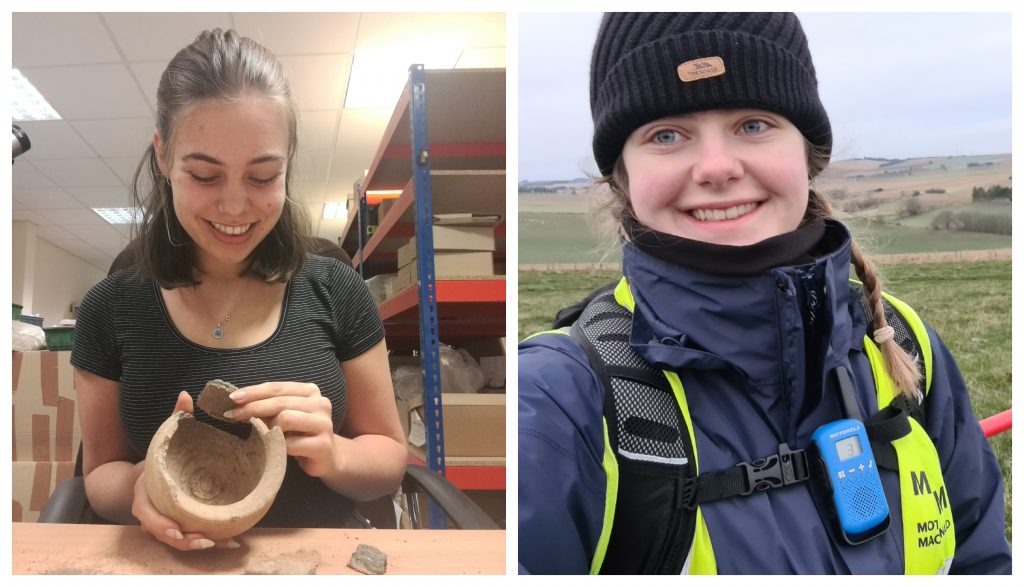 Back in 2020, Jemma Moorhouse and Lanah Hewson were each awarded an MA Scholarship funded by National Highways at Reading University. This included a placement to work with MOLA Headland on the archaeological excavations that formed part of the A14 Cambridge to Huntingdon Road Improvement Scheme. Having now completed their degrees, they are looking back at their experiences and sharing with us the results of their work.

Both Lanah and Jemma’s Masters dissertations were based on finds from A14 excavations. Lanah’s research focused on testing the techniques used by MOLA Headland to study Roman pottery unearthed during the excavations. As an enormous amount of pottery was found, only a small selection could be fully analysed. Lanah studied the effects that this approach has on research:

“The results were really interesting and showed huge potential to impact the wider world of professional and academic study! I wasn’t expecting such a clear message to come from the project, but it feels amazing to have contributed to the discussion of sampling theory and practice in a way that is evidence-based rather than strictly theory-based.”

Jemma, on the other hand, explored the chemical composition of small metal finds using X-ray fluorescence (XRF). When a material is hit with X-rays it emits a specific form of radiation, called fluorescence. As each element has its own unique fluorescence, XRF can be used to determine what materials something is made from. Using this technique Jemma was able to identify a clear regional pattern of metal use in Cambridgeshire that changed through time:

“While bronze was the main copper-alloy used during the Iron Age, over time leaded bronze became more common and brass was also introduced. By the mid-Roman period, the range of copper-alloys found along the A14 reflects the trade connections that this area had with nearby towns, as well as further afield. The late Roman period then saw an increase in recycling, likely due to a shortage of fresh metal. These results highlighted the potential of portable XRF in commercial archaeology for understanding the composition of large quantities of finds.”

Jemma’s dissertation has been nominated for the Royal Archaeological Institute Master’s Dissertation Prize, highlighting the significance of this research. Whilst completing their degrees was of course important, both Lanah and Jemma felt strongly that what they were researching mattered and would have a real-world impact.

“I think we were both very aware that the results of our dissertations could impact the way that professional archaeology might develop. When you’re writing up the dissertation you tend to just focus on your topic, your sample, what you are trying to show. But we were constantly reminded about the wider impact on professional units.”

Naturally the Coronavirus pandemic and multiple lockdowns impacted on Lanah and Jemma’s work. However, with the support of the University and the A14 team they overcame these challenges. Having now completed their degrees, Lanah and Jemma are considering their next steps.

“I definitely want to stick within the world of pottery and ceramic building materials, I just love it so much. It’s such an enjoyable material to work with, I feel like the potential for it is incredible, you just can’t learn enough.”

“I would like to do a PhD at some point in the future on Roman small finds (especially metal, but also glass or jet) but would also like to bring in some scientific analysis after enjoying this side of the MA so much.”

In the meantime, they have both secured roles within the sector. Jemma is now working as a graduate archaeological consultant at Mott MacDonald in Glasgow, while Lanah is training as an Iron Age and Roman pottery specialist at MOLA Northampton. Both agree that the opportunity to work with specialists on the A14 Scheme had a significant impact on their studies and decision to pursue a career in commercial archaeology. Looking back at their overall experiences, our two former students have only good things to say.

“I honestly had the best year – if anything my only complaint is that I wish it was longer! I absolutely loved my masters and placement, and I have met some amazing people as a result of it.”

“I genuinely had an amazing time and made friends and professional connections for life! It was definitely more than your average masters!”

The results of Lanah and Jemma’s research have made an invaluable contribution to the A14 project and will have a wider impact. Their work will inform and influence the methods used on large-scale archaeological excavations – such as the way specific finds are selected for further analysis when a significant amount of materials are unearthed. Ultimately, this will benefit our understanding of the past on future National Highways schemes, as well as other major infrastructure projects.