Now that excavations on the A14 Cambridge to Huntingdon improvement scheme  are complete, it is over to our specialists to reveal the finer details and significance of what has been uncovered. In this blog, MOLA Headland specialist Ian Betts shares why tiles found near Offord Cluny may hint at a Roman villa and bath house once existing nearby, and what they reveal about an extensive tile trade network which once operated across Northamptonshire and beyond, nearly 2000 years ago…

The production and use of brick and tile in Roman Britain in some ways mirrors the changes in the manufacture and sale of goods in modern Britain over the last few decades. Throughout the country, businesses with connections to their local area have been replaced by large supply chains which distribute goods over a wider area.

The same can be seen in the production and distribution of brick and tile in Roman Britain from the mid-3rd century. During this period many local tileries closed to be replaced by large central production centres sending their products over vast areas. One such production centre was Harrold in Bedfordshire which supplied tiles of a range of shapes and sizes to Roman households throughout central and southern Britain in AD270–350. Harrold products can easily be identified by numerous crushed shells present in their fired clay. 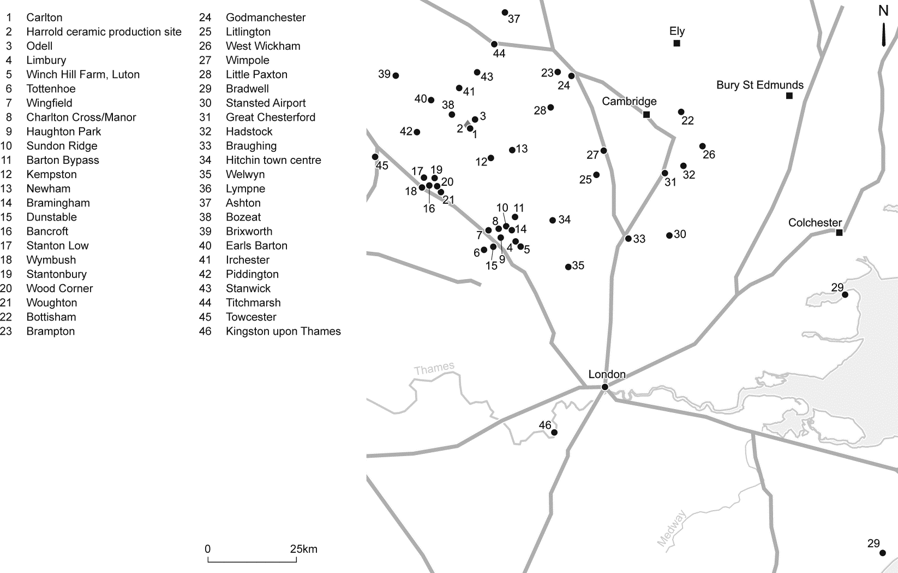 A map showing the known extent of the Harrold tile trade network. Each point shows a location where Harrold tiles have been found.

Some 48 kilometres away from Harrold at Offord Cluny, excavations for the A14 scheme have uncovered some Harrold tiles which are a tantalising clue that a Roman bathhouse (and therefore villa) may once have existed nearby. Though no remains of the structure itself have been found, by analysing building rubble recovered by our archaeologists, it has been possible to identify remnants of two types of hollow tile, one of which almost certainly came from a bathhouse.

One is a box-flue, a type of tile which allowed heat from an underfloor hypocaust (central heating system) to travel up the walls so helping to warm the room. But the other type is even more significant: fragments of tapered hollow ‘voussoir’ tiles, which would have been used in a vaulted roof. These would have sat on top of the hollow box-flues set in the walls to allow heat to circulate across the arched roof space, to keep the ceiling warm and avoid condensation droplets falling onto the heads of bathers. These heating tiles almost certainly came from a bathhouse at the villa.

Hollow voussoir (left) and box-flue (right) tiles allowed hot air from underfloor hypocausts to circulate around the ceiling and walls of Roman bathhouses.

Having your own baths for private use and to entertain guests was considered an essential requirement for many villas in Roman Britain. It is fascinating to think that the Romans living in what is now Northamptonshire would go to such great lengths to build them, sourcing materials from nearly 50 kilometres away.