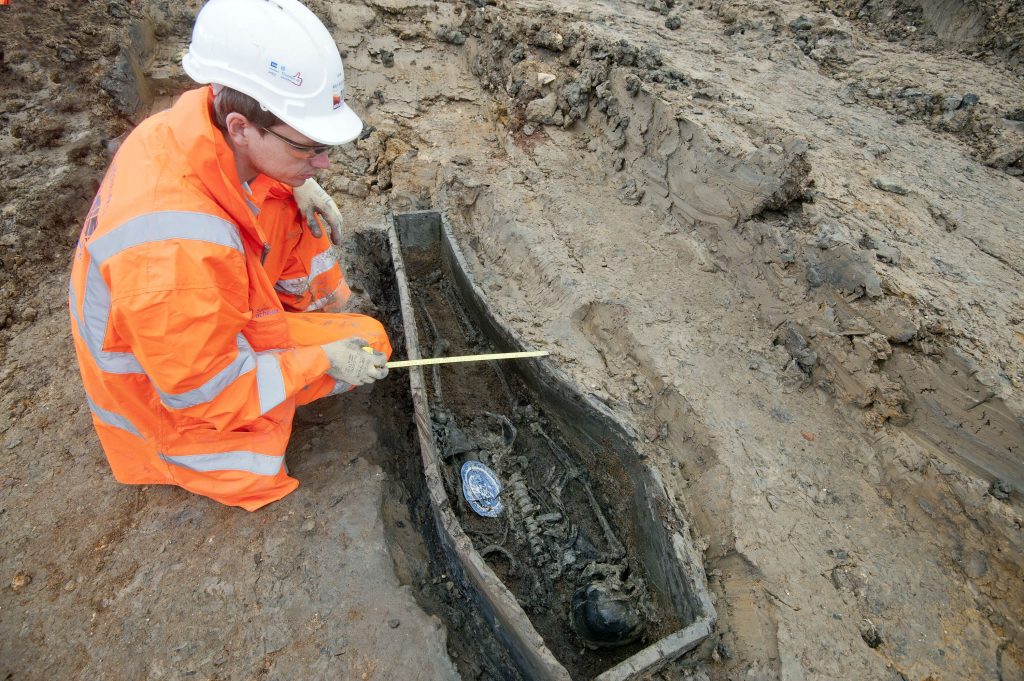 Beth Richardson, Senior Finds Specialist for MOLA Headland, is part of the team of experts analysing thousands of finds recovered during excavations at St James’s burial ground Euston for Costain Skanska Joint Venture (CSjv), and Park Street burial ground in Birmingham for LM, on behalf of HS2. A number of plates of various shapes and sizes have been found within burials from both sites. In this blog, Beth explores why these may have been buried and whether they may once have held salt.

It is rare to find objects of any type with 18th- and 19th-century burials, but MOLA Headland archaeologists excavating the many thousands of graves from burial grounds on the HS2 route, St James’s at Euston in London and Park Street in Birmingham have found twelve ceramic plates placed in coffins on the deceased or at their feet. The plates, which were found with men, women and children, are the sort of everyday china people would have had in their homes, some in the popular ‘willow pattern’ design still used today. 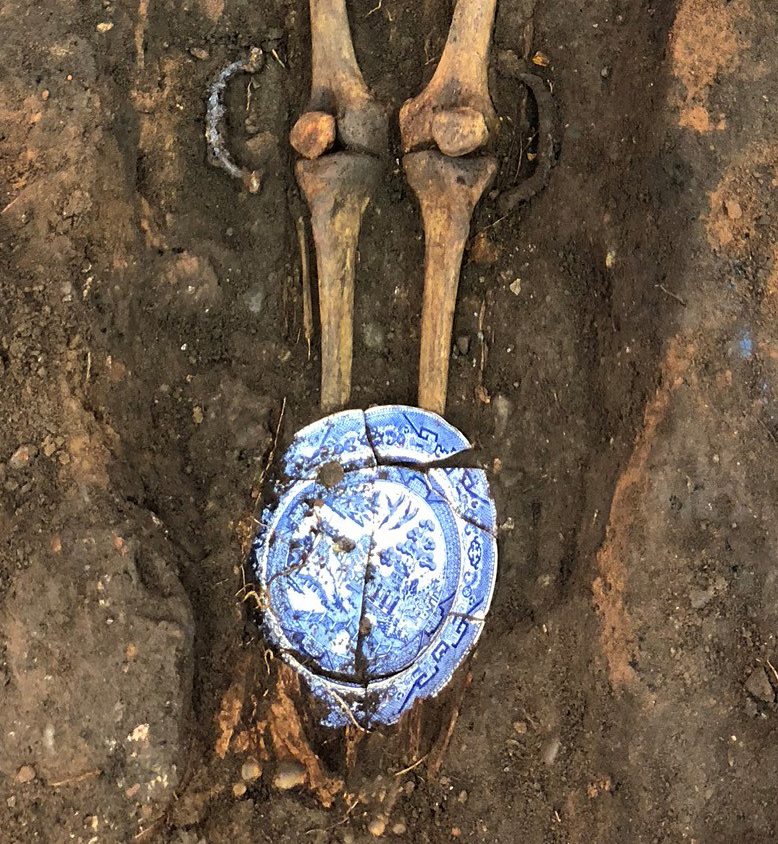 It seems likely that the plates would have held salt, thought at the time to have protective properties as a symbol of eternal life. The antiquarian John Brand writing in 1795 noted that that in his native county of Northumberland ‘a plate containing a little salt [was placed] on the corpse’ as a preservative for the body but also ‘an emblem of the immortal spirit’ and a deterrent to the devil ‘the devil loveth no salt with his meat’. He also said that in Ireland the plate of salt was placed over the heart and in Scotland portions of salt and earth were placed on the breast on a wooden platter. The custom was known as late as 1920 with the Coroner for Cumberland writing to the anthropologist Sir James Frazer ‘Another custom, almost universal amongst the poorest classes in the country is the placing of a saucer of salt on a dead man’s breast’. 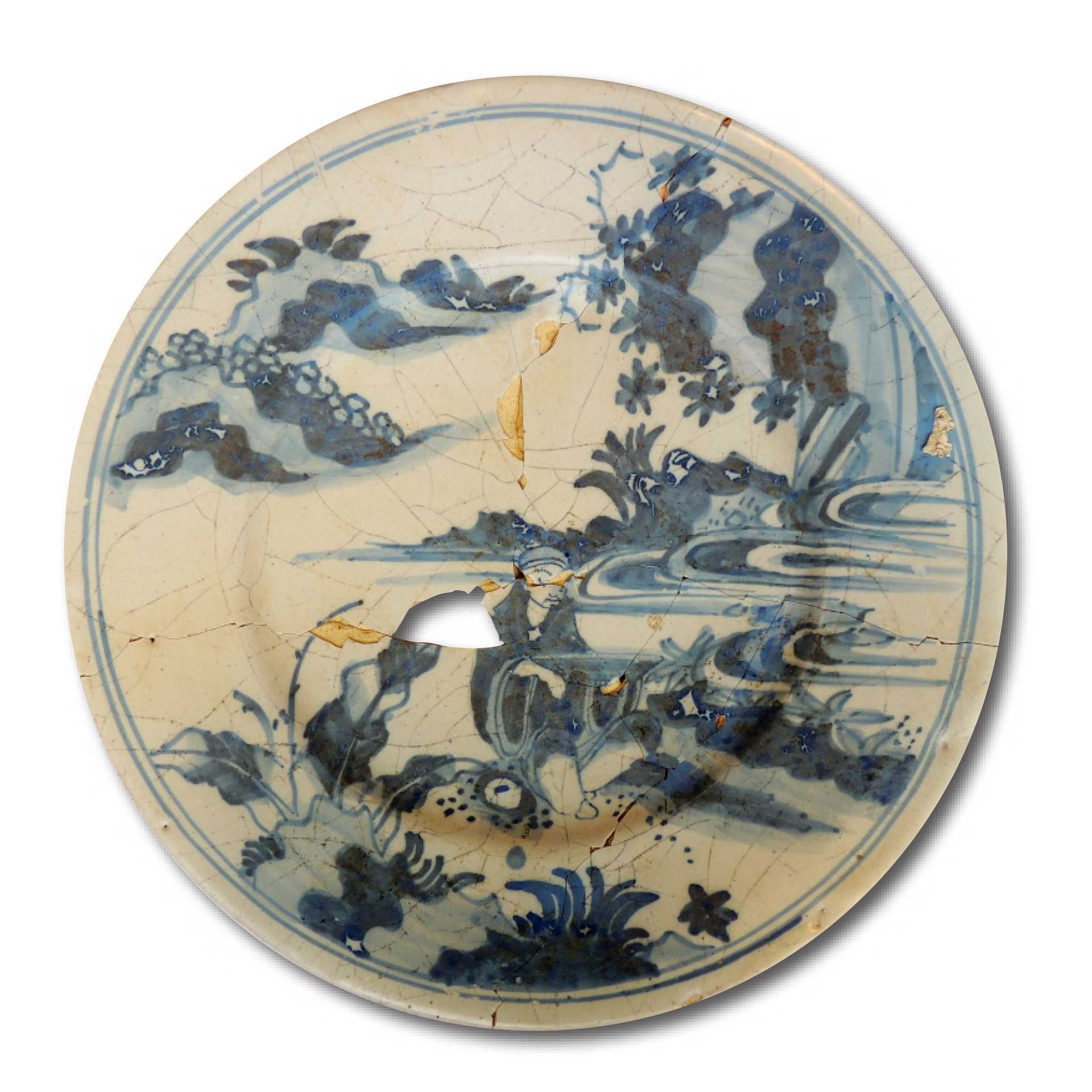 These finds are rare but it is not the first time that plates, some ceramic and some made from paper-thin pewter, have been found with burials. The first example, dated c1670–90, was found on the pelvis of an adult male in the churchyard of St Martin Vintry, London, the only plate from hundreds of coffins in City of London churches bombed in the Second World War. Further plates, dishes and bowls were found during recent large-scale excavations of burial grounds in London and elsewhere, including a late 17th-century plate from the MOLA Crossrail excavations at the ‘New Churchyard’ (1539–1739) at Liverpool Street and several small tea plates or saucers found in the coffins of babies or children at MOLA excavations in Southwark and East London. A high percentage of the plates are found with children and young women, possibly because they had died unexpectedly or their untimely deaths were so deeply mourned.

It seems that the plates with their contents would normally have been removed before burial which partly explains why so few are found. Correspondence in The Gentleman’s Magazine of 1784 notes that the plate found on a body in a Leicester churchyard ‘had been forgotten to be withdrawn’. It is also likely that the custom had been common throughout Britain but like many other traditional beliefs declined in the 18th century and became marginalised to the countryside and among poorer and less educated people. It may well be that the individuals buried with plates of salt in the London and Birmingham churchyards originated from areas where the custom was still practised. 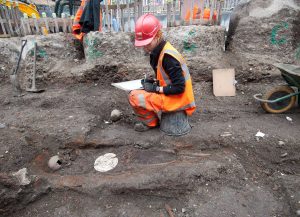