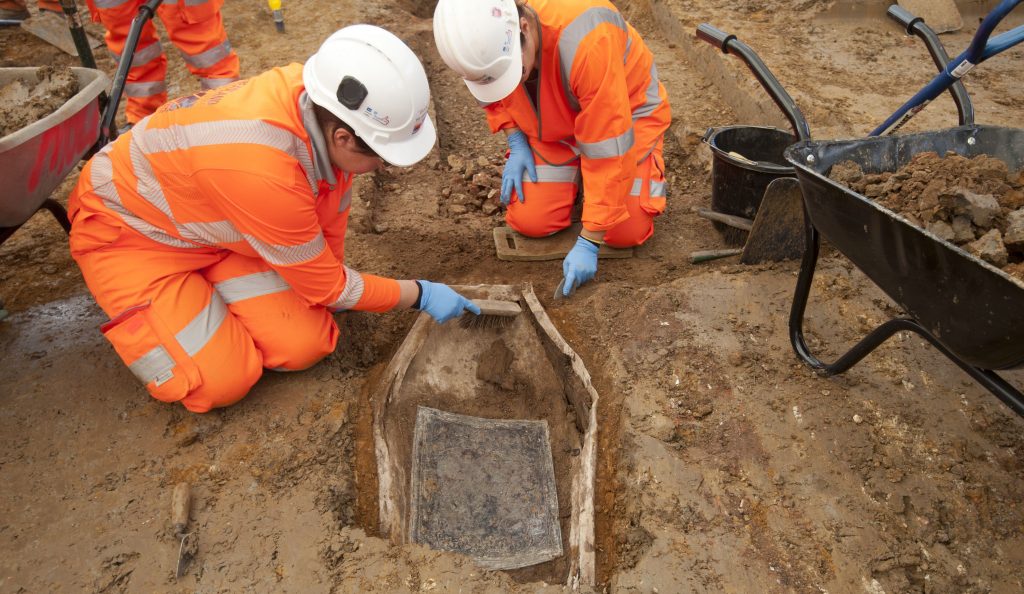 Robert Hartle, Senior Archaeologist for MOLA Headland Infrastructure is currently working on the archaeological excavation of the 18th and 19th century St James’s burial ground at Euston for Costain Skanska Joint Venture (CSjv) on behalf of HS2. In this blog Robert delves into the burial ground’s artistic connections and what the team is uncovering.

In the late 18th and early 19th centuries British artists enjoyed a revival; there were more opportunities to train and exhibit their work, greater demand for portrait paintings from the wealthy and, as such, prospects for and public opinion of Britain’s artists were more favourable than they had been for centuries.

London was at the heart of this revival, with much of the focus on the Royal Academy of Arts, which opened in 1768 and was ‘the’ place to exhibit. Founded 250 years ago in 1769, the Royal Academy Schools quickly became the most prestigious place to study art.

Located in the parish of St James, Piccadilly, many of the artists that frequented the Academy also lived in the parish. Looking through parish burial registers the names of many of the period’s prominent artists and their family members appear. The registers identify:

With the opportunity to combine historical records with archaeological evidence, where coffin breast plates survive revealing the identity of the individuals buried, we’ve begun to uncover new insight into the artists of St James’s burial ground.

Frederick James Havell came from a family of artists. Originally a steel engraver in line and mezzotint, Havell, his brother William and fellow engraver James Tibbits Willmore experimented with early photography techniques, presenting their Cliché Verre process at the Royal Society in London in 1839. Sadly, later that year he was admitted to and then died at Bethlem Hospital with ‘the occurrence of insanity’. His condition may well have been caused by erethism, also known as mad hatter syndrome, because of prolonged exposure to mercury vapours from photographic experiments.

Jane Elizabeth Havell, his wife, died six years later and was buried in the same grave with a picture frame placed face-down on her chest. No picture survived within the glass and wood frame, but this personal object is a poignant reminder of her family connections. It’s possible that further analysis of the picture frame will be able to tell us more about what the frame contained.

Whilst recording monuments and inscriptions from the burial ground we came across the gravestone of Robert Ward who died in 1829. His gravestone inscription reads:

[Sacred to] the memory … Late student of the Royal Academy School. His skill as an artist… of the attainment of the highest excellence had not… hand of death snatched… from the pursuit of his studies the hopes… This stone is raised as a slight tribute by those who admired his talents as an artist, and who respected him for his worth as a man

This personal commemoration provides us with a picture of a man at the beginning of his journey to become an artist, further osteological analysis may be able to tell us more about the man’s life and untimely death.

English sculptor John Charles Felix Rossi, often simply known as Charles Rossi, was recently identified by his beautiful breastplate. One of Rossi’s works can be seen not far from the burial ground, on Euston Road. Rossi modelled the ‘St Pancras caryatids’, inspired by female figurines which support the roof of the Erechtheion of the Acropolis of Athens, in 1822. We know from historical records that although he enjoyed considerable success as a sculptor, Rossi suffered from ill-health and financial difficulties in later life. Now that it has been possible to identify his remains, our osteologists may be able to see how these changes in circumstance impacted his skeleton.

As we continue our research we’re excited to discover more about the renowned and sometimes forgotten artists of St James’s burial ground.

The archaeological programme at St James’s Gardens in Camden, London, is being carried out by our experts on behalf of CSJV for HS2 Ltd. To find out more about the programme visit www.hs2.org.uk or for information on what is going on in your local area or how you can get involved head to https://hs2ineuston.commonplace.is/.