The road ahead: making sense of twelve thousand years of archaeology along the A14 in Cambridgeshire

The road ahead: making sense of twelve thousand years of archaeology along the A14 in Cambridgeshire29 Sep

Our efforts to uncover the secrets of the Cambridgeshire countryside through the archaeology programme of the A14 Cambridge to Huntingdon improvement scheme have reached an exciting stage. We have started the main phase of analysis, with a project team of over 70 people spread all over the country looking at everything from plant and insect remains to pottery, metalwork, animal bone and human remains. Over the next three years, this analysis will give us a clearer understanding of how people lived, worked, interacted and died in Cambridgeshire across a period of over 12,000 years, and will lead to series of fascinating outputs to enjoy, including:

This work builds on two years of work to assess the vast quantities of data collected through excavation, and understand the nature of the archaeology and its potential to address some fundamental research questions. This provided vital new information on the many exciting discoveries spanning twelve millennia, including:

Members of the project team at work 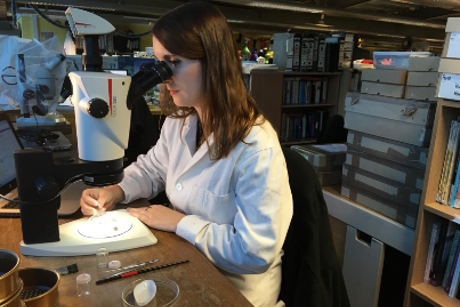 The coincidence of the start of the analysis phase with COVID-19 lockdown has certainly posed some challenges. However, with the project team being so dispersed we already had robust systems for remote working in place, including an integrated cloud-based database, extensive data hub and mapping system. As a result, analysis is progressing well and we look forward to being able to update you here on all the new discoveries we make over the course of the next few years.

Look forward to hearing more about…

In an exciting new development, all of the assessment data can now be viewed online via the Archaeology Data Service: https://doi.org/10.5284/1081261. This site will eventually house the entire A14 digital archive and reports and interactive book, which will be uploaded in stages, so please do check back here for further downloads.