What can stone tools tell us about prehistoric lives on the A14?

What can stone tools tell us about prehistoric lives on the A14?29 Apr

The further we travel back in time, the harder it becomes to read the traces left by our ancestors. While we have a wide variety of objects, buildings, and even written materials dating to our recent past, not as much survives from the Stone Age (c. 500,000-2200 BC). We have to rely on small clues to piece together how human beings lived more than 10,000 years ago.

During the excavations on the National Highways A14 Cambridge to Huntingdon Road Improvement Scheme we found more than 5,000 worked flints. They show that people have been living in this region for 1,000s of years. By analysing their type and quantity, and where they were found, we can begin to understand what life was like in our distant past.

How were flints made?

On the A14 route, prehistoric peoples gathered flint from chalk outcrops across Cambridgeshire. Once a suitable piece of raw flint was identified, ancient makers would skilfully shape it in a process known as knapping. This involves taking larger blocks of flint and hitting them in just the right place to obtain different shards (called flakes). Some of these flakes were simply thrown away, but a few were worked further and turned into tools. Creating flint tools was an incredibly skilful process and is likely to have taken years to master.

They suggest the presence of a base camp, where people are likely to have lived either permanently or seasonally. From here, small groups may have travelled to other locations to hunt, fish or harvest wild food for the whole community. This base camp would have been ideally located on the edge of the fens by the River Great Ouse, within easy access of food and other resources.

During the Neolithic period (c. 4000-2200 BC) we see signs of more permanent settlements. Along the A14 route, we discovered worked flints buried together in pits – a widespread practice at the time. The reasons for this are still hotly debated, and we don’t know whether these pits had a practical or ceremonial purpose. Stone axes found during the dig also suggest that people were cutting trees and clearing areas of land. They were probably making space for farming, which was introduced to Britain around this time. 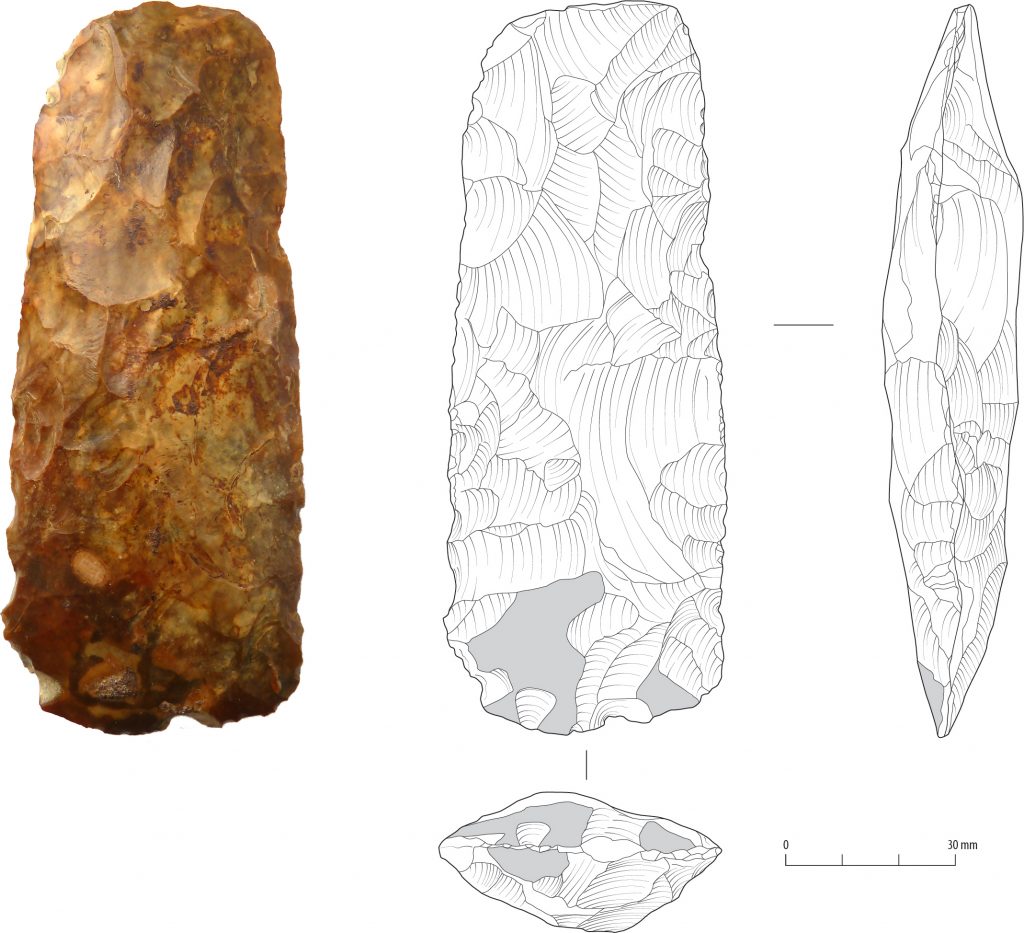 Early Bronze Age (c. 2600-1600) arrowheads found on the A14 show that alongside farming, people continued hunting. We also discovered cremation burials, containing a type of knife typical of this period. Called plano-convex, these knives are flat on one side and rounded on the other. All heavily burnt, these tools were chosen to accompany the dead and were likely included in funerary pyres. These knives may have been used as part of funerary rituals or were intended to accompany the dead into the afterlife.

Piecing together the evidence

There are still many aspects of life in the Stone Age we do not yet fully understand. The evidence we have is quite limited when compared with more recent periods. This makes its study both challenging and fascinating! It relies on paying close attention to the smallest details to reveal as much as possible about every single object. By studying flint artefacts on the A14 route, we’ve not only been able to better understand how people lived, but also how communities and ways of life dramatically changed over time. As they say, the rest is history!