Excavations on the National Highways A14 Cambridge to Huntingdon Road Improvement Scheme may be complete, but we’re continuing to study the incredible amount of finds unearthed. Now, when you think about X-rays you probably imagine hospitals and airport security rather than archaeology and ancient pots. However, recently more than 100 pots found on the A14 were analysed using X-rays. This is helping us understand more about how these ancient vessels were made and used thousands of years ago.

How were ancient pots made?

In the past, pots were made using many different methods, but by the end of the Iron Age period (c.800 BC – AD 43) two techniques predominated: coil-building and wheel-throwing. Coil-building was used well before the invention of the pottery wheel. This method involves firstly creating a long roll of clay. This is then wrapped in a circle, with further layers added to build up the walls of the container coil by coil, before smoothing them by hand. Wheel-throwing, on the other hand, requires a spinning wheel, on which the clay is shaped to form the desired vessel.

X-rays can help understand how objects were made because they highlight details we would otherwise miss. On the A14, they are helping us reconstruct how pottery was made during the late Iron Age (c.100 BC-AD 43) and Roman period (AD 43-410).

To understand how pots were made in southern Cambridgeshire, MOLA Iron Age and Roman Pottery Specialist, Adam Sutton, X-rayed more than 100 vessels. These vessels were first divided into two groups based on when and where they were made. Group one was made up of Late Iron Age pottery found in southern Cambridgeshire, whilst group two was Roman pottery from the newly-discovered industry in the Lower Ouse Valley. The pots were then subdivided into different categories based on their shape and size, to see if different vessels were made in different ways. The radiographic analysis carried out on these pots produced some interesting results.

X-rays are a type of radiation. As they pass through an object, their energy is absorbed at different rates, depending on the density of the material. A detector picks up the X-rays after they have passed through and turns them into an image, called a radiograph.

When a pottery vessel is X-rayed, differences in the texture of its surface are shown in lighter and darker shades. They seem very subtle to the untrained eye, but they help us understand how a pot was made. For example, if you look closely at the image below, you can see the faint traces of a coil seam: this means that the vessel was coil-built. 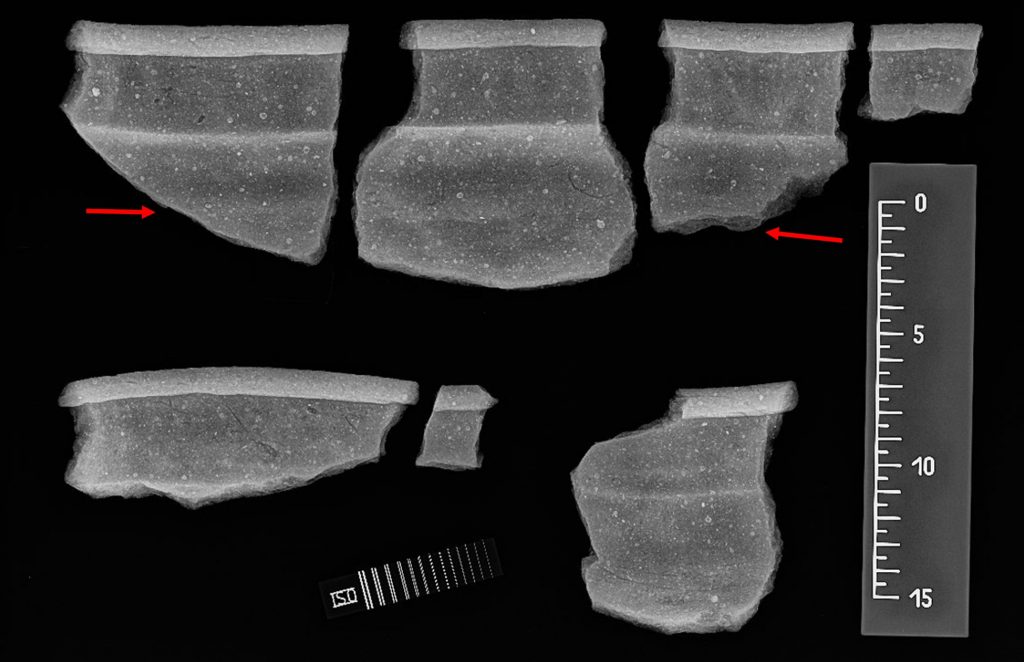 Radiograph of a Late Iron Age jar. The horizontal coil seam runs between the two red arrows, showing that the pot was coil-built.

Wheel-throwing, on the other hand, can be identified thanks to the presence of diagonally oriented inclusions and voids, as shown in the image below. This pattern is caused by the rotation of the wheel. 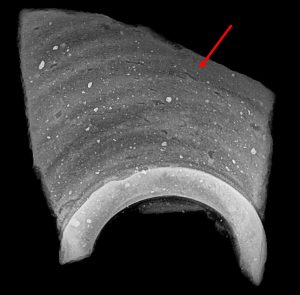 Radiograph of a Roman jar. The red arrow points at a group of small dark voids, all diagonally oriented. They show that the vessel was formed by wheel-throwing.

When looking at Late Iron Age materials from the A14, X-rays show that potters mainly employed a mixed technique, using coiling to shape their vessels and wheel-throwing to finish them. This combination is known as ‘wheel-coiling’.

Radiography also showed that different techniques were used to produce different pots. Beakers (tall drinking vessels) were more commonly wheel-thrown than other types of pottery. As a result, they were finer than similar pots produced in south-eastern Britain at the time. They were also more elaborately decorated. This is particularly striking, because analysis has shown that fully wheel-thrown pottery was relatively rare in southern Cambridgeshire, more so than in the rest of south-eastern Britain. So why were beakers shaped using the wheel?

Research is still in progress, but the first results point to a rather interesting theory. As Adam Sutton explains:

It is possible that beakers were traditionally used in communal drinking and to serve alcohol. They may have had a different social role compared to other types of pottery. As a result, they were created with a specific look and tactile quality, one that was better achieved by using wheel-throwing.

Radiography showed that pottery from the early Roman Lower Ouse Valley industry was increasingly (but not exclusively!) made using the wheel. There was, however, one exception. Large jars, which could approach a metre in height and were likely used for bulk storage, continued to be ‘wheel-coiled’ like they had been during the Iron Age.

According to Adam Sutton:

Large vessels are often more challenging to produce using wheel-throwing. Very large vessels sometimes require different pre-made components to be joined together on the wheel. This is a difficult operation that needs to be carried out with skill and care. This may be why we see more evidence of coil-building in the X-rays of these large pots.

The data from the A14 clearly shows that Roman craftspeople made pots in several different ways and that, while older techniques continued to be used, wheel-throwing became more common. It would be tempting to assume that potters simply switched to more advanced techniques over time, but it is more complex than this.

Objects were made differently based on how they were going to be used and the role they played in people’s lives. The decision to use a wheel (or not) to shape a vessel was influenced by its function and desired appearance and, more widely, by the society of the time. In the centuries before and after the Roman conquest different cultures mixed, producing complex changes which archaeologists are still exploring. The economy was also changing, with a greater quantity and variety of objects being produced and the roles of specialised craftspeople developing. Studying how objects were made and used, including pottery, is helping us understand these processes and peoples’ different responses to them. Innovation, as today, was not a simple process: it involved experimentation, rejection, and resistance.

X-ray analysis doesn’t simply show us how pots were made, rather it connects us directly to the thoughts and processes of ancient craftspeople and, more widely, to the world they lived in.