Across the scheme we’ve uncovered items which relate to Anglo-Saxon clothing and textile production, sometimes in small amounts, and sometimes in larger, more concentrated amounts. In this blog, MOLA Headland finds expert Lyn Blackmore comments on the evidence we have so far…

Q: To make clothes, Anglo-Saxons would first have had to produce thread and then make cloth, so what evidence do we have so far of textile production along the route of the A14C2H?

We’ve uncovered lots of different items which when viewed together, suggest that textile production was taking place at several different places along the route, most probably in the 6th-9th centuries AD.

Clay loom weights and spindle whorls of bone and stone

The first task was to produce the thread for weaving, and the mostly likely fibre for this was wool, probably from local sheep. Before spinning was possible the wool fibres had to be prepared by combing with a special comb with long iron teeth, we’ve uncovered numerous fragments of these teeth at key sites along the route.

When ready, the fibre was spun by hand (the spinning wheel was not invented until the 13th century), possibly but not necessarily by mounting it on a wooden rod (known as a distaff) and then twisting the yarn by spinning from a drop-spindle (usually made of wood) with a whorl made of bone or stone giving the weight needed to rotate the thread. It would be a similar process to that shown in this video. 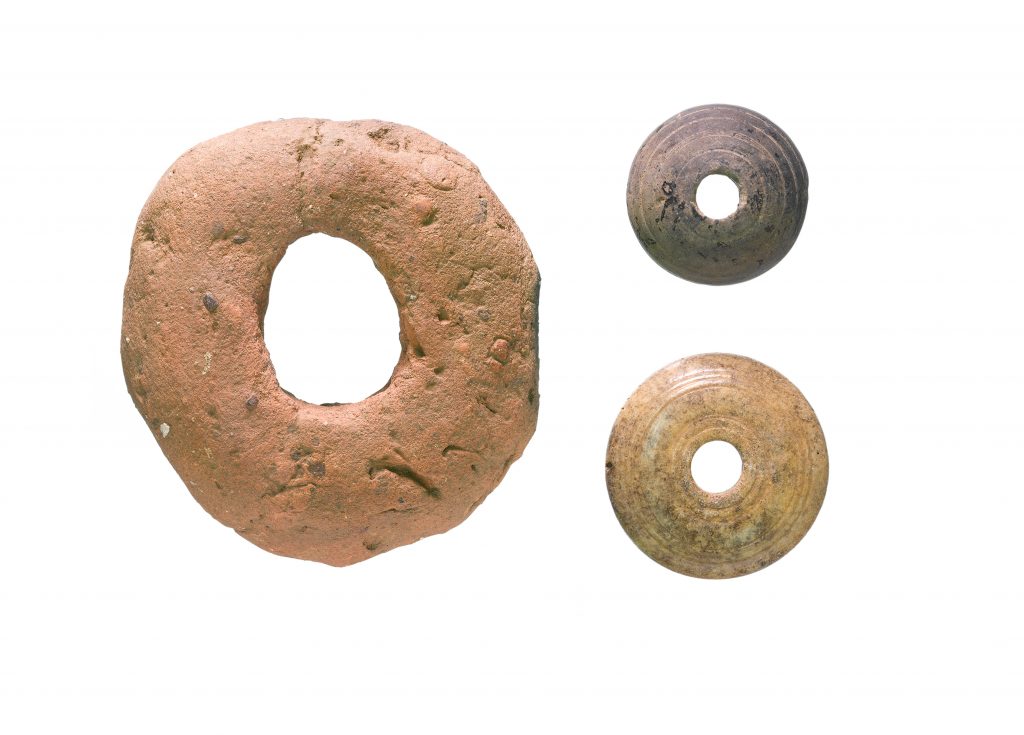 When enough yarn or thread was ready, it could be woven on a wooden loom. Loom weights, as the name suggests, were used to keep the vertical strands (the warp) taut whilst the horizontal threads (the weft) were woven through and packed tight with a bone thread-picker – up to 30 weights could be used on a single loom (in two rows), each attached to a number of threads. Loom weights are common finds, as so many are needed for one loom that they are often found in groups; at Conington the largest single cluster was 22 weights. Find out more about spinning and how looms work here. 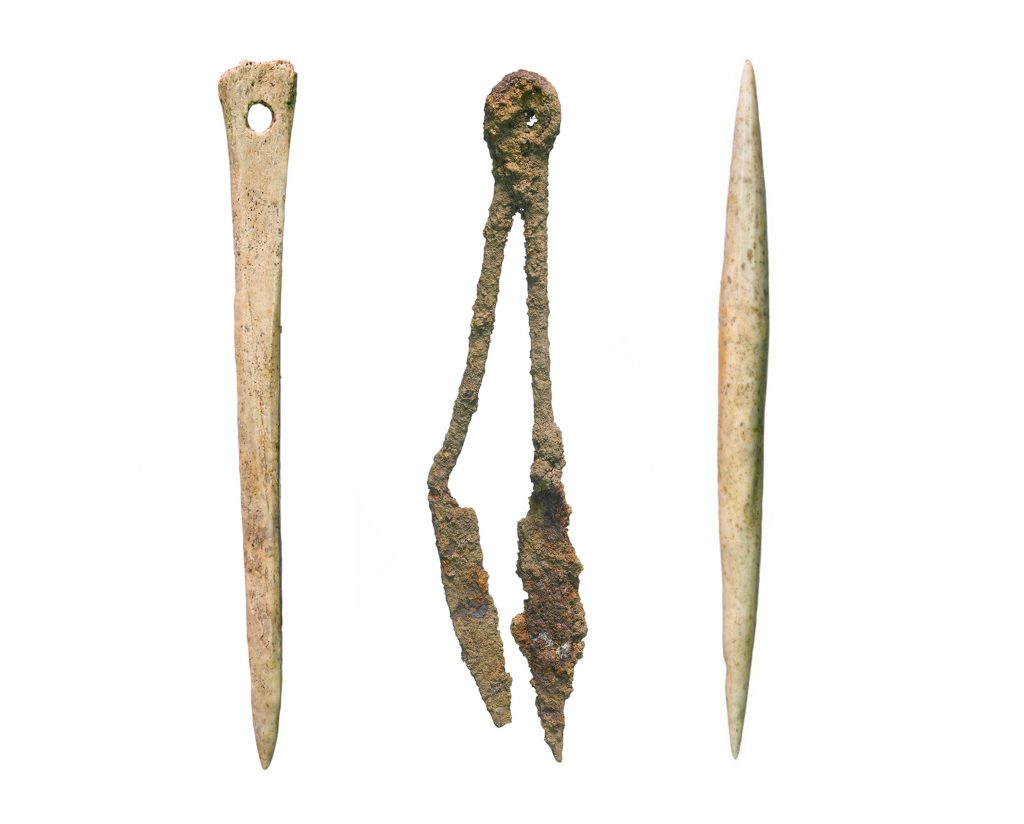 Whilst you would need lots of loom weights for one loom, you might only need a few other tools. During our excavations at Brampton and Conington we discovered bone tools, including the needle shown here, and iron shears used for cutting cloth, which have given us a more complete picture of the process.

Q: Do we know yet what sort of fabric was being made?

The size of the loom weights certainly suggests a heavier fibre but at this stage in the process it’s impossible to tell for sure – however – we know from other excavations that the Anglo-Saxons across the country were making not only plain, or tabby weave cloth but also patterned fabrics with interesting weaves, including twill and diamond twill, from various natural fibres like wool, flax and hemp, which could be dyed to produce different colours. Gold thread and imported silk were also used by Anglo-Saxon craftsmen for high status products.

On a tiny number of finds we were able to identify mineral-preserved textile. This is when the remains of cloth become trapped within the corrosion which accumulates on the iron or copper object with which they were worn, so there is a chance that in the analysis stage of the project we might find out more about what sort of fabrics were being made here and what they were made from, and analysis of animal bone may tell us whether wool was readily available.

Q: What sort of clothes were being made?

Whilst the clothes themselves don’t survive in the archaeological record, some of the accessories do. Dress accessories from this period were both decorative and functional – the dainty pins pictured here discovered in the Brampton area may have been used to fasten or secure headscarves or veils rather than clothing – and can give us tiny glimpses into what the Anglo-Saxon people of Cambridgeshire were wearing. 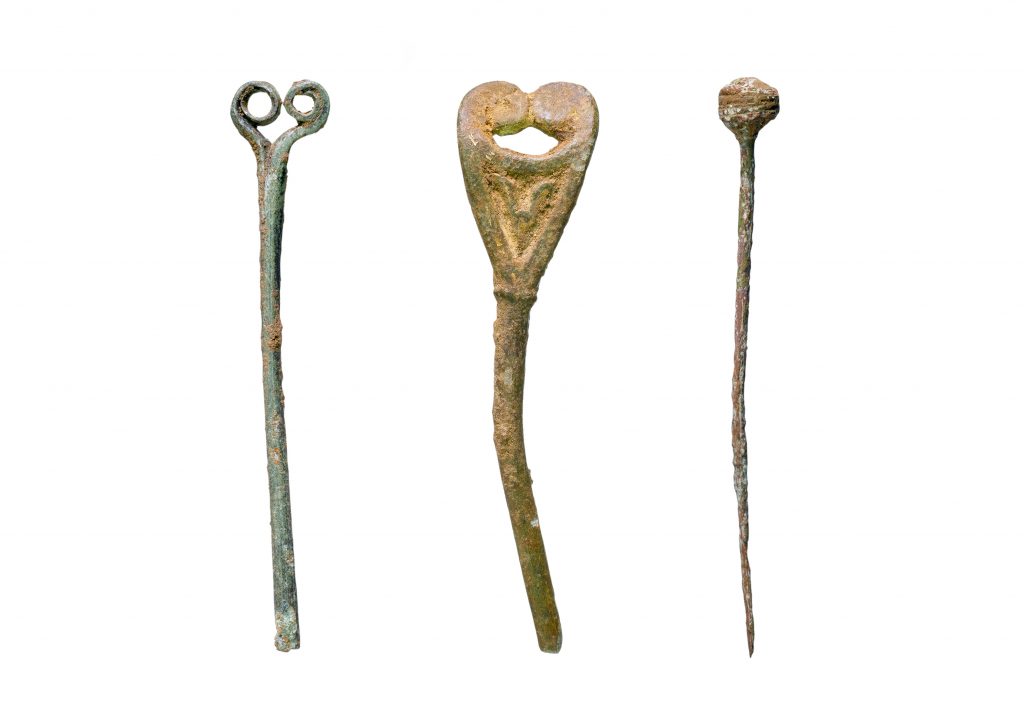